My heart breaks for the lives that give up hope. I used to be hopeless like them. It wasn’t too long ago that I wanted to give up. I was giving up. I tried so hard for so long to drink myself to death, but all that the drinking did was put me into a deeper pit of depression, isolation, and darkness where I was tormented by thoughts of suicide. I could barely breathe. I remember hoping for things like dying in my sleep, but I kept waking up. Each day, I felt worse than the day before. Since the alcohol wasn’t killing me quickly enough, then I would hope to die in a car crash. I always thought it would have to be a single car crash because I didn’t want anyone else to be hurt. I just wanted the pain to stop. I really didn’t want to take others with me. I thought of other ways to die, but for some reason I would always be concerned about my mother or other people. At least I thought about others when I wasn’t too drunk and depressed to care. I remember there were times when I was concerned about what it might do to someone who cared about me if I died by my own hands. It would have been a surprise, at least I think so because since I’ve been sharing my story, some people have said to me that they had no idea that I was suffering from severe depression. Is it weird that I cared so much for others when I was in such a dark place? I don’t know. I’ve always been different I guess, but being different is what kept me alive long enough so the Lord could come in and save my life for eternity. For that, I am GRATEFUL.

My idea of the Lord taking my life meant that I wanted Him to end it. End the pain. End the suffering. It was a wasted and worthless life that didn’t deserve to live. I believed that lie for most of my adult life. I am so grateful for God’s life-saving love and that His idea of taking my life was completely different from what I had begged Him for. He still took my life, but He took it so that He could make me a new creation in Christ. That was in February 2010. His love is truly life-saving. It took me a long time to really get that I am a new creation. I’ve heard it and have read it over and over through God’s Word, through my pastor, and through other godly people in my life. But for some reason, it’s something that I really needed to more than just hear to believe. I needed to believe by feeling it in my heart. I wanted to feel it and believe it so badly, but I had a difficult time doing it. Something was missing. Although I had an idea of what it might be, I wasn’t completely sure. That is, until recently when God led me to something beyond incredible and fulfilled a longtime desire of my heart. 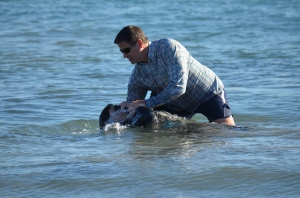 November 24, 2013, was the day. It was one of the greatest days of my three plus years of walking with the Lord. I will never forget it. I am so excited to share that I was one of three women who were baptized in the Pacific Ocean in Corona del Mar, California!

…by Your blood, I have been cleansed!

People, it was COLD! Cold, but beyond amazing. For the last few years, I had been praying to be baptized by full immersion. I figured that when the time was right, the Lord would make a way for it to happen. However, I figured that it would probably be in a swimming pool. A heated one, if it was wintertime! I did not plan to be baptized on that day (silly me thinking I’m in charge of things again). I didn’t take a change of clothes, I showed up at the beach with my camera because I wanted to capture some photos of a dear sister in Christ getting baptized. But the Holy Spirit prompted me and reminded me how long this desire had been on my heart. He said it was time and to follow Him, so I did. I did not want to miss out on the blessing He had there waiting for me. I saw how God answered my prayer and how He put things into place to make it happen at the most perfect time in my journey and with my own pastors which was such a wonderful blessing. I am so very grateful. This baptism is what I had been missing and I really had no idea how incredible it was going to be. It has triggered something in me that I cannot seem to find the words for. But those around me have seen me glowing. Even as I write this, I can feel the glow and it has already been eight days. I can feel the tears welling up again—such tears of joy every time I think or share about it.

A day I will never forget…

I AM A NEW CREATION. The old Debbie is dead and gone. The new Debbie is ALIVE IN CHRIST! The Lord has given me another new beginning–a new life, a very joyful and extremely blessed one. The old depressed, drunk, and isolated me has been gone for a few years now, but it seems like it just happened. My sins are forgiven—I finally got that too. The captive has been set free. There is Hope in Jesus and I pray for those who may be where I once was. I pray that you will find Hope in Him too. He’s waiting to hear from you and will meet you right where you are. Jesus is always just a prayer away.

Lord Jesus, Thank You. I pray that You will take many more lives like mine…AMEN.

Here is a video of the November 24th baptisms through Hope Center of Christ, which is my wonderful church home. If you can spare a few minutes to watch it and listen to it, I think you will be blessed to see what God has done for a few souls who have given their lives to Him. I am thankful to God that I am one of them!

HCOC photos of this beautiful day:

2 thoughts on “New Life: A story of God’s amazing life-saving love at a time when unbearable depression had me begging Him to take my life.”

I have learned to deliberately set my heart each day to seek the Lord. It is hard not to keep choosing life when you are deliberate. ♥ †